skip to main | skip to sidebar

At the Saturday Market there is a booth that sells fish cakes and bakes.  I have no idea why bakes are called bakes because they are fried.  Bakes are just a dough of eggs, flour, shortenin, baking powda, and maybe milk or something.   They are alright but the fish cakes at this booth are the best thing to have for breakfast at seven o clock in the morning.  Mike has convinced himself that the fishcake booth and Ray's Roti's are the two best 'restaurants' on the island (Ray's Roti's is a shop that sells fried chicken and rotis (curry chicken or other meat or lentils stuffed in indian flat breads)).  He could be wrong and I don't eat chickens I've never met so I wouldn't know about the rotis because Ray only makes the chicken kind.  But I am inclined to agree with him on the fish cake stand.  So I tried to make them at home.  These don't quite make it up to the glorious heights of the Portsmouth Market but they are pretty good.  Maybe we need to start eating them at seven o'clock in the morning....  I found some recipes but I didn't really think I needed to follow one so this is a combination of all of them and is based on whatever you happen to have in the kitchen at the time.  I think the market women might use some kind of salted fish-cod or something.  I just use fish scraps or fish that I don't really like a whole lot (we got some teeny red and pink ones that were nothin but bones but made nice cakes)

-Enough cooked fish to make about 3/4 a cup- broken up
-One big potato or a hunk of yam or some tannia- nothing too terribly starchy
-Herbs- parsley is good, thyme is great, I love rosemary in everything, basil kind of works, sage might work if it grows in your yard- maybe a tablespoon, depending on the pungency- chopped 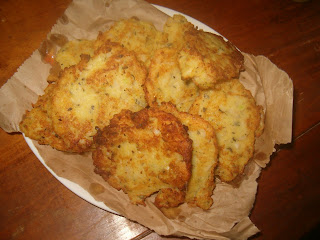 -One egg-beat up
-1/2 a cup or so of diced onion and/or sweet pepper
-A squeeze or so of lime juice, plus the zest of the whole lime
-Maybe some flour or finely ground cornmeal
-Salt and pepper
-Maybe some hot pepper
-oil (coconut, vegetable, or olive) for frying

If you don't have cooked fish lying around cook some and shred it up.  Boil the starch (I really love tannias because they are less starchy than yams or dasheen; they are closer to a potato but they taste even better) peeled and cut into bit chunks in salted water.  When it is soft take it out and smash it up.   Fold everything else in with a fork.    If the mixture is way too soft add a little flour or cornmeal to stiffen it up a wee bit.  It is ok if it is not firm enough to pick up and form into a cake- I just let it drop off a spoon into the pan.  But if it is way way too wet it just won't get dry in the center and that just won't do.

Heat a little bit of oil (a 1/2 inch or so) in a skillet til super hot.  You can deep fry these just fine, it's not that I don't like deep frying, I'm just not set up for it or rich enough.  Too much oil seems like a massive extravagance that even my extravagant self can't seem to muster up the courage to do.  So pan-frying works just as well as deep.

When the oil is hot just get a spoonful of the 'batter' and slide it off the spoon into the pan.  I like to squish it out a bit.  Cook a few minutes on one side and then flip.  If it is not nice and brown and has soaked up all the oil the pan is not hot enough.  Fry all the cakes, drain on paper towels or bags, and serve hot.
Posted by Ann Tindell Keener at 1:55 PM

Ann Tindell Keener
Food is not "cuisine", it's culture. It's what drives everything we do. It is who we support and how we live our lives. Eating well is more than knowing how to cook and making spectacular sauces; it's knowing your farmers and enjoying the seasons as they come. It is about learning how to live with the land we walk on, and respecting and relishing the way food was meant to be.

Places I've Been, People I Know, and Things Worth Looking At