skip to main | skip to sidebar

This beet dip is taken from Madhur Jaffrey's World Vegetarian, where it is called Pantzarosalata II, or Pureed Beet Salad (in Greek).  I usually change it in some/several ways, but her original recipe is tasty, so I'll write it here. 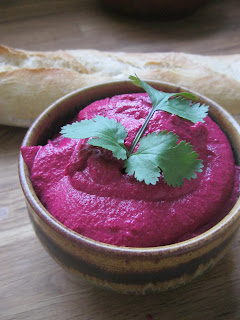 Boil the beet in its skin until soft, about 40 minutes.  Drain, peel, and let cool.  Chop coarsely.  Throw everything in a food processor and blend until smooth.
That's what Madhur says to do.  I've done all that and almost none of it.  Sometimes I don't have bread- it is just fine left out, although it has a more "vegetable" texture instead of a starchier one.  I've never used a potato. I've also left the walnuts out, but they make it really good.  I've added cumin and cilantro, lemon juice instead of vinegar, parsley and chives.  I'm pretty sure I used a touch of tahini once instead of walnuts, with good results....  Just play around and see what happens.  Serve with a nice crust bread or handmade crackers by Ashley.
Posted by Ann Tindell Keener at 10:14 AM

That sounds fantastic. Kinda like hummus, I never make it the same way twice because it is so versatile. This seems alot like that. I will ahve to give it a try. Thank you!

Karen Noell brought that very dish to our knitting gathering and it was exclaimed over!

Ann Tindell Keener
Food is not "cuisine", it's culture. It's what drives everything we do. It is who we support and how we live our lives. Eating well is more than knowing how to cook and making spectacular sauces; it's knowing your farmers and enjoying the seasons as they come. It is about learning how to live with the land we walk on, and respecting and relishing the way food was meant to be.

Places I've Been, People I Know, and Things Worth Looking At